What an angry reaction?... You won't even let me grumble a bit...

Ok i've added three buttons to my own repository.
The First is for create new sheet.
The Second is for crate wires.
The Thrid is for add lamp symbol.
And who can create a sheet class and a symbol class for using its with command buttons?
Top

It focuses on wiring and harnesses, but does lack gui and good data validation/messages.

It does provide open source code and very useful is it includes a wide range of colors and standard cables etc etc. A lot of the cabling structure/types might be a good start to help this project.
Top

wandererfan wrote: ↑Thu Nov 24, 2022 12:32 am Were you thinking of something like a transparent overlay on top of a view that could be drawn on? That would be a neat way to annotate drawings.

Yes, indeed. An overlay that only shows resulting geometry and that has an edit mode like sketcher which provides some handles and widgets to parametrically manipulate auxiliary geometry or texts.

Maybe TechDraw isn't the right workbench but it could integrate another workbench like PartDesign integrates Sketcher.

If views were derived and dimensions, tolerances, and notes were applied, there still was some "stamps" needed for annotations such as tables displaying where datums are positioned, lists of coordinates of points to be checked, legal notes. Some were put on the sheet background and some were put in a view.

I think proper drawings are not dead yet. Sometimes you want to place a part on a drawing to quickly check its shape; and no one wants to scratch or break the screen of their notebook or tablet by placing heavy objects on it. And they are stil part of the contract if you order Parts from a manufacturer. But you are right, in most cases printed paper can be sbstituted by pdf files.
Top

My suggestion to create wiring plans using existing FreeCAD features as much as possible:

2) Import the "raw" plan into a TechDraw drawing and finalize it there, see second picture. 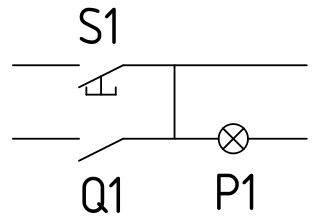 Detailed description of the workflow:

The macro is a first small and quick developed testversion, to show the workflow. I am no electrical engineer. Maybe the layout of symbols is not correct.
We need electrical engineers, who know which symbols are the most often needed, and how they have to look like.
The best way to show that, is to create the symbol in correct scale in the Sketcher workbench and publish the file here.
Sketches can be translated automatic into other formats. Please do not upload pdf files including hundereds of symbols without scale and without differing which are important or not.

Please test the macro and give me feedback if the suggested idea is worth to follow up.
Top

The Symbols do look good and for more symbols I would recomend to try to implement the standard IEC 60617 (also known as BS 3939) symbols(https://en.wikipedia.org/wiki/Electronic_symbol). I would also lik it if while creating the symbols we would look what KiCAD already has and how they look there, so that if you use these two Programs you could make a nice and uniform looking Projekt. This is because many Symbol are the same in the Electronic and Electrical field.

My problem with the aporche of using Draft View is that I think that having a big Symbol library, wich will come, is that creating them with the more or less limited feature of draft view is a hassle. So my suggestion would be to use the SVG's as symbol base, in this way someone can us all the tools that for example Inksake and SVG offers and than those are imported in to the TechDraw drawing.
Edit:
Additionally if some where to create some custom SVG tags, similar to the editable text with the templates, it would be possible to add a symbol description, other property and I hope even Pins/Connections, those maybe even so that you can define what tiy of connection it is so that you can not connect a Pipe to a wire.
Top

Those are the current KiCAD Std. Device Symbols, I am not sure if relay all of them are used in the Electrical field but I am sure that most of them are. 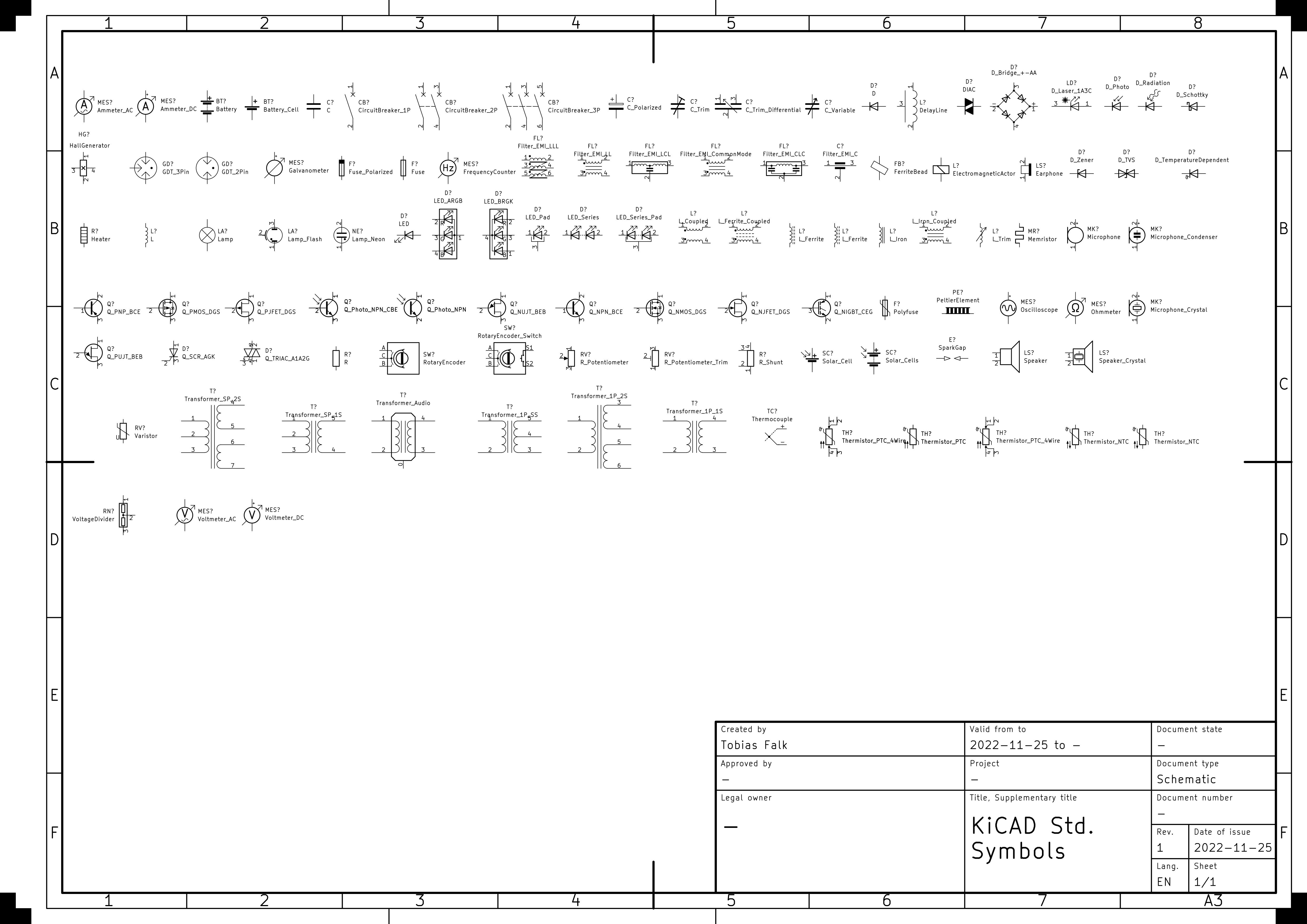 As Draft is mature enough to be scripted, and has not to be interfaced too much with the 3d modelling part, and probably a "screenshot" of an existing part, "modeled with FreeCAD" would suffice to make plan showed.

Probably the lacking part is a way to interface a 3d view made in with Draft to produce a PDF file that could be easily printed.

But this discussion has been done sometimes.

One of main problem could be to cope with "paper format" so a drawing made for "US papers" could be printed on "ISO paper" format or "Japanese" (I don't know other formats, as usually printers refers to these formats, so probably there are not so many others around) so some scaling could be needed.

From the little I know PDF use bezier curves to define "curved things" so it could not to be "too far" from FreeCAD on some extend.

I've seen as example the pdf 1.5 when speaking of Graphics

Carlo D.
My English and Italian material about FreeCAD https://github.com/onekk/freecad-doc.
My Blog: https://onekk-maker.blogspot.com/

See on GitHub how to fund development

Conceptually, how different is this from Dia/Visio? Pull symbols from a palette, add lines to connect them, some text here and there....
Top

wandererfan wrote: ↑Fri Nov 25, 2022 5:37 pm Conceptually, how different is this from Dia/Visio? Pull symbols from a palette, add lines to connect them, some text here and there....

It would be super useful if these wires/cables/pipes could be somehow parametrically connected to the 3D model of the wire (Ends, diameter, bend radius). Placing 3D model at the ends. And propagating the wire length from 3D back to the drawing. This way the system schematic, cable drawing, and model all match; which is always a constant fight when going between Visio and a cad program.

Might be able to piggy back off the Dodo work bench for 3D stuff.

I'm imagining how this works, seems like it gets difficult after 2 or more pages. Where you have too much stuff to fit on one page, work needs to be redone to split it onto 2+ pages. It might be nice to have one abstracted "top level view" which can be split into sections and placed onto the page without editing the design, such as subsystems.

Then these smaller sections can be placed into tech draw with some auto generated lines connecting them. Maybe their placement could be treated similar to views+snapping so rearranging them is easy; not sure how cross "view" lines would work.

Seems like a lot, other than placing wires/schematics in a drawing it seems out of scope for Techdraw.
Last edited by ChemicalCoal on Sat Nov 26, 2022 10:47 pm, edited 1 time in total.
Top

My background; automation engineering on various levels of management. From junior engr. to senior mgt. my first contact with Electrical-CAD was in the early 90’s on a rothring E-Cad.

Now to the point, IMHO;
In this discussion there are two important things to be differentiated
• Electronic Engineering (Idea, circuits, PCB design, PCB manufacturing …)
• Electrical Engineering: (set of sensors and actors attached to something, e.g. house, machine, plant etc.)
• Automotive electrical drawings again are an other cattle of fish. Not further mentioned here.

Above results in two completely different needs.
For the electronics division, the circuit drawing is used for PCB routing, photolitho (or whatever PCB printing technique).
The electrical division will draw up schematic diagrams, of which terminal list, cable list and parts list are generated. Professional tools are also capable to lay out the control cubicle with the components defined in the schematic diagram and component data base. An important parameter is the geographical allocation of sub-cubicles, sensors and actors belonging to the control being linked to the “mother”cubicle. (Hence the suggested routing on cable trays is a very desirable feature)

Having been working on all continets (less Antartica

) I also learned that there is not an unique approach to drawing standards. The systems might be divided up in the American drawing standards and European drawing standards. Where in the US several square feet large drawings had been used, the Europeans use since many decades drawings of A4 size, in the old days sometimes multiple A4 (e.g.7xA4, all one paper). The main reason for A4 was easy handling of the schematic drawings in a book size. (Still today, many wiring workshops work on paper copie, though big Screens are applied in big outfits.)
The last comment does bring an idea to me, how to have a function where the workshop can thick off on a screen the wired wires in a soft copy of the schematics. This would open a new world to CAD/CAM in the world of wiring control cubicles. (well at least to my antiquated knowledge).

In this forum a lot has been kicked around on symbols. There are the DIN standards (most also EN / IEC standards ) on:
• Symbols ( https://std.iec.ch/iec60617 )
• Codes (abbreviations) for actors and sensors https://de.wikipedia.org/wiki/Betriebsm ... rotechnik)
• Geographical allocation (EN 81346-2, https://de.wikipedia.org/wiki/Betriebsm ... rotechnik) )
• Drawing setups

In principal there are only small deviations from the standards allowed as the el-schematics are part of the legal demanded documentation for EC conformty declaration.

From personal experience, depending on the location on this nice world, the symbols change slightly. A symbol editor would be probably a must.

Automatic naming according to the drawing path is standard.
The same applies for the reference table displayed at the drawing location of the mother symbol. each contact location (page and path)

One of the big deficiencies of Visio-CAD based technology compared to a desired free-cad; the first type has difficulties to move connections (end point of a wire) if the symbol is moved. It needs always to be done in two steps, move symbol (with one attached connection moving also) and the second connection has to be adjusted manually to be straight vertical up to the bars) , by experience a big source of capital mistakes.

Some nice videos on a usable, but with deficiencies littered commercial product:
https://www.youtube.com/watch?v=ZqHKKhzrrlA

Since I do not have a clue how to program such a thing, I am no help on the doings. If you need input on the specification ant further information on the workflow to create an electrical schematic diagram I am willing to participate with my share.