Example of a mold suitable for plastic injection to produce pulleys in series.

Example of a mold suitable for plastic injection to produce pulleys in series.

Greetings to the Community!
An example (very rough, just to give a constructive idea) of how to model a mold, for the production of two pulleys through the production process for injection of thermoplastic material.

It is complete with the power supply unit (injection channels), with removable movable inserts (with manual movement, but it is possible to make it with mechanical or synchronized pneumatic / hydraulic movement), with centering pins / matrix-piston coupling, with centering pins of the mobile inserts, of the air vents, of the extraction group with spring repositioning.

All the screws for the assembly are missing (they have not been inserted so as not to overly complicate the rendering of the display) and all the fittings of the various edges, as well as the ducting of the flow of the thermal fluid (cooling / heating of the mold).

Obviously the same molding can be obtained by designing different molds (different positioning of the impressions) or by providing a molding with 4 pulleys or 6 or 8, instead of 2, etc.

The original file was split into two parts for attachment. 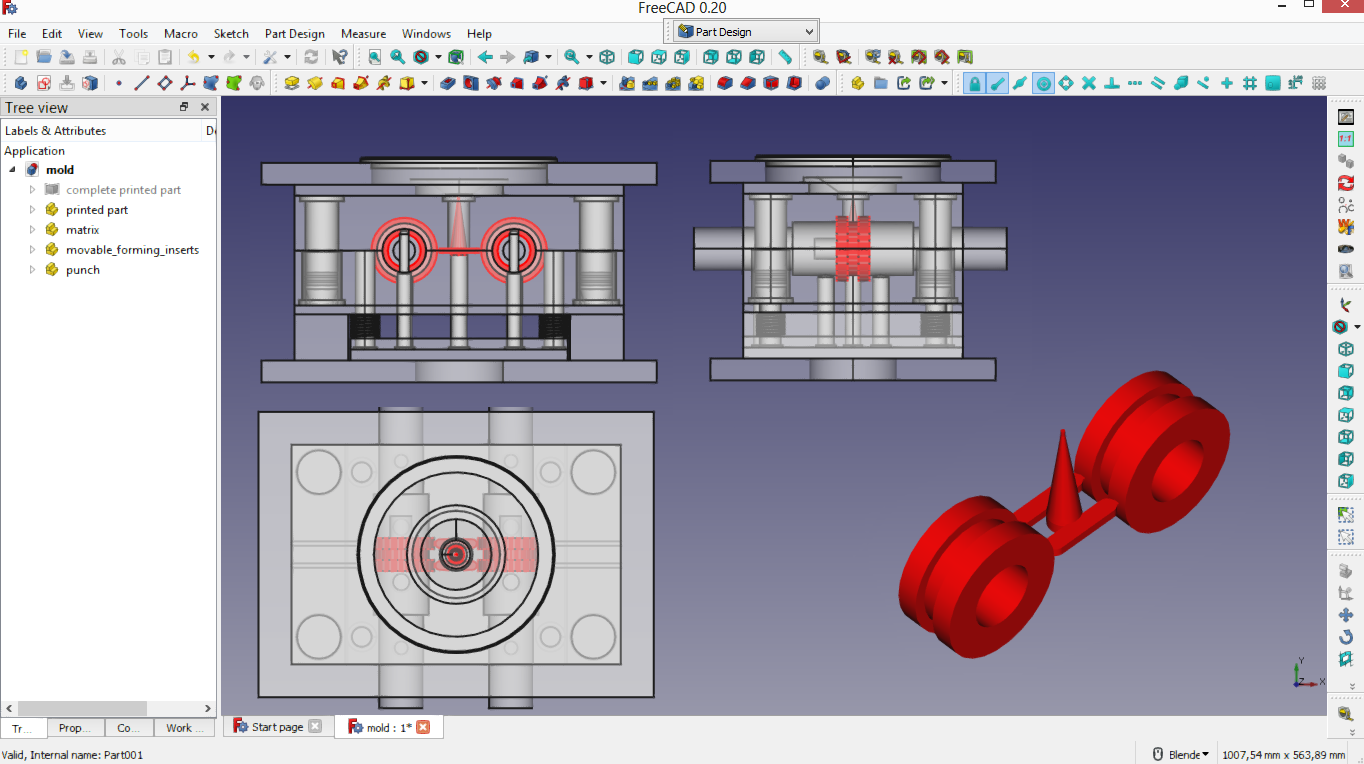 Nice work! Really a great example of CAD at work. I hope everyone looks at this.
Top

Very nice. Did you build one in aluminium with a CNC machine or something - to test it in practice? How did you make the nice FreeCAD animation?
Top

Hi PJT, Greetings to the Community!
I'm glad someone is interested in thermoplastic injection molding.
Thanks to @freedman.
I was in this field, for a decade, many many years ago (maintenance of presses and molds) when this type of production was rather artisanal and we began to know the processing by "electroerosion" for the production of molds, which at the time consisted exclusively from a myriad of dowels obtained with machine tools for chip removal.
The design of that time, which I would define as "artistic", was very pioneering and was "translated on paper" exclusively using the pencil and the drafting machine, the realization was entrusted to toolmakers who were also "Artists of steel sculpture".
A myriad of molding tests followed with consequent adjustments and modifications until the final result was reached.
Today there are dedicated sws that allow not only the correct conception / design, according to the production life cycle, but also the simulation for the correct thermal and filling trend, not to mention the myriad of CNC machines dedicated to them.
The mold, shown above and attached, has not been made, it simply wants to be an example of a workflow for this particular modeling.
To create the animation I applied ("patiently") the technique used in the comics "transform and take the picture", certainly now obsolete but which in many cases comes in handy.
In FC you can use the Wb "Exploded Assembly" (which hopefully can be further updated and improved) or the "Assembly".
For editing, motage, optimization and production I used "Gimp".

Really nice, I regularly see companies who ask for designers of plastic injection molding tools, maybe it would be cool to send them to this post next time?
Joachim520
Freelance engineer
My website | Fiverr | YouTube
Top
Post Reply
5 posts • Page 1 of 1