About the development of the FEM module/workbench.

Forum rules
and Helpful information for the FEM forum

IMPORTANT: Please click here and read this first, before posting on this FEM fourm

Please also click here and read the Help forum rules, for more generalised advice before posting on any of the FreeCAD forums

Also, be nice to others! Read the FreeCAD code of conduct!
Post Reply
10 posts • Page 1 of 1

If this is not in the correct Forum, can you tell me which one is should be in.
I have written some code, for the FEM WB, that enables the user to erase elements from the display. The majority of the code is written in c++ with some processing in python. The code is based on "Mesh->Nodes Set" in FreeCAD version 20, the source of which I downloaded in May, 2022.

The first picture shows the full mesh, which is based on the "Fem.FCStd" example, and the second shows a cross-section.
The attachments are:
1 - a different FCStd file which contains examples of the output of this new function, as described below
2 - my version of "femmesh2mesh.py"

This function can be used: The new functionality will be in the FEM WB, under Mesh->Erase Elements.

Open "erase.FCStd". Because of file attachment size limitations, this FCStd file is not the same as the one shown in the first 2 attachments. In the "Labels and Attributes" list, we have:

"Mesh2Fem" has been created with an additional function I have added to "femmesh2mesh.py", which now generates an FEM from the mesh that the code originally generated.

To change the "ResultMesh", use:

You can't do this with a mesh that contains the word "Fem".

Does this look like a useful addition to FreeCAD?
If it is, then how do I go about incorporating it? 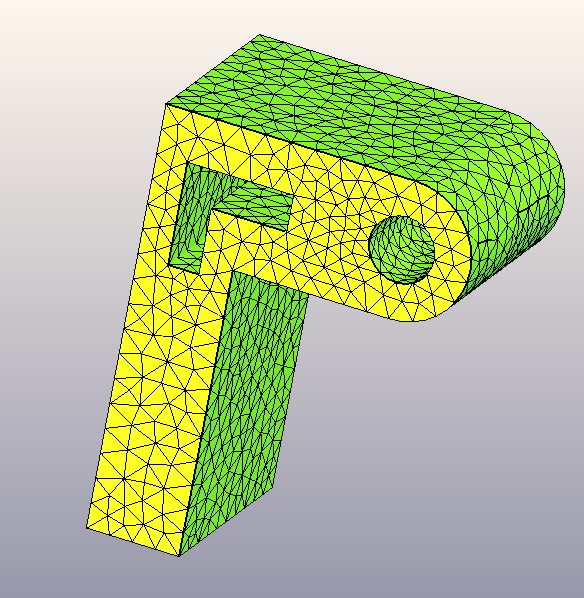 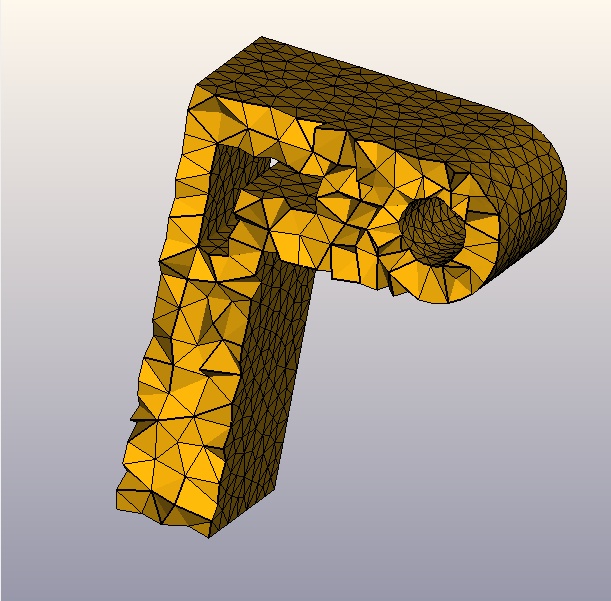 Is the idea of erasing elements something that has a visual goal(read improved version of clip face). Or is the idea to remove elements so you don't calculate them enymore
Top

Yes, hiding individual elements from the display can be very useful. Professional postprocessors (such as Abaqus/Viewer or ParaView) offer such tools and they are commonly used.

Maybe on this occassion you could also add a tool for element set creation ? It would be much appreciated.

You already have the code so you could create a Pull Request on GitHub. Maybe @bernd can help you with that.
Top

Is the idea of erasing elements something that has a visual goal(read improved version of clip face). Or is the idea to remove elements so you don't calculate them enymore

This is purely a visual thing, so I am not removing elements from the analysis.
In "Mesh->Nodes Set" a rubber-band polygon is generated and those nodes inside/outside are chosen. I use this method but with the CofG of the elements being inside/outside the polygon.


Maybe on this occassion you could also add a tool for element set creation ? It would be much appreciated.

What data would you require in the element set?
Top

Element sets are objects analogous to node sets but for elements. They are basically grouped element selections used in definitions of various features in CalculiX. Just like node sets, they can be useful when defining features that are not yet supported by FreeCAD and require modification of the input file. The current tool for node set creation may also need improvement. To be honest, I'm not sure if it works properly and if it does, it's not very intuitive. But maybe on this occasion, you could also add an element set creation tool based on the same way of selecting elements as for your tool presented here. The difference would be that they wouldn't be hidden but only added to a named group available in the input file:

I want to keep the code doing "what is says on the tin", i.e. generating a display of selected elements. I don't want to add any options to this function.
As a by-product, the code generates, internally, an object called "ElementsSet". This contains the list of elements that are displayed together with the element type. Second and subsequent invocations create "ElementsSet001", etc.
You can't see the contents of these objects in the production version of FreeCAD.
In my development version I have:

I have now updated my code to Version 0.21 and it works. There are: At this point I would like to incorporate this code into FreeCAD - the question is how?

Do I need a "Pull Request" and if so how do I get one? And then what do I do?

How do I incorporate the new code into FreeCAD?

How is git involved in all this?

Thanks for your future help
Top

Do I need a "Pull Request" and if so how do I get one? And then what do I do?

How do I incorporate the new code into FreeCAD?

How is git involved in all this?

This page on the wiki describes all the necessary steps: Source code management.

You will have to create a PR on GitHub. Then it will be reviewed by the devs before merging. You might be asked a few questions about your code so check any notifications from GitHub.

Maybe @uwestoehr can help you with this.
Top

Do you have a GitHub account? If you have, Fork freecad, make your change on your branch,then make a pull request.
Since you have C code, need other people to compile to test it.

For the py file change, you can provide a test case and procedure to test your added function. You can ask if someone could make a pull request for you if you are not good at GitHub thing.
hfc series CAE workbenches for FreeCAD (hfcNastran95, hfcMystran, hfcFrame3DD, hfcSU2 and more)
Top

@mac_the_bike Feel free to ask for help with git related stuff. It's a PITA but also quite a powerful tool.
Alone you go faster. Together we go farther
Please mark thread [Solved]
Want to contribute back to FC? Checkout:
#lowhangingfruit | Use the Source, Luke. | How to Help FreeCAD | How to report FC bugs and features
Top
Post Reply
10 posts • Page 1 of 1